As a musician, I've never had much of a problem with the idea of paying for digital downloads, and having their distribution somehow being restricted. With DRM (Digital Rights Management) comes complications such as burn limits, authorizing computers/accounts and a limited range of compatible players.

However, the most dangerous is possibility of losing all your music if the company you bought your Rights-Managed music through decides to shut down their DRM server that regulates all the hassles that
manages all the other things that are, at best, a minor hassle (and almost always have a work-around).

Today there comes news of yet another of DRM server being shut down by a major online music retailer: Wal-Mart. What does this mean to you? Probably nothing. Most of the people who read this site use Macs, and the files affected are WMA files, but let's assume for a second that you use Windows and bought your music from Wal-Mart. So, what happens? You need to burn all of your music to CDs as Audio files, then re-import them as MP3s (which, according to the DMCA is illegal). And if you don't? They'll all go kaput on October 9th.

And, by Kaput, I mean, they'll stop playing on your computer, and they'll disappear the next time you plug in your compatible portable player. In order to play (or transfer) them your music player queries the DRM server for a thumbs-up before the first note starts playing. If that server isn't there, the software won't play the file.

Why is this interesting? Well, for a few reasons.
One: The record industry is backing down on the DRM thing a little bit, allowing places like Amazon and WalMart (and iTunes to a smaller degree) to sell DRM-Free files. Really, they are the ones who saddled us with this albatross in the first place, not the retailers.
Two: Wal-Mart made a big deal out of selling songs for 88¢...and as it turns out, if you were lured to use their online store instead of the marginally more expensive iTunes, you get rewarded by them revoking your right to the song you "bought."
Three: I hear a lot of complaints about iTunes' DRM. But you know what you don't hear? Apple shutting the DRM servers down and sticking you with a bunch of worthless crap/revoking your license to the music you already bought.
Four: None of the DRM-FRee online music stores have all the artists (usually the most popular or historically bankable) that iTunes does, and it seems obvious to me that it's a ploy to try and squeeze a little extra money out of the people who absolutely HAVE to have this stuff and don't care about DRM until it bites them in the ass. So, although people will complain about iTunes having DRM at all (most notably vocal is Steve Jobs himself), it looks like the best balance of Managed and Not-Managed to actually get what we want from the record companies.

Of course, you could always buy CDs, rip the MP3s, and then sell the CDs to someone like Half Price Books or Record & Tape Traders. That way there is no DRM, you get to pick the encoding quality, and you get all the ID3 info from GraceNote. Oh yeah, but you are gonna pay twice as much. ;-)

I've been trying to put together a concise list of the design books I own, because this time every year Nancy asks me to give my Amazon wishlist a little extra attention; and I have been having a little trouble because I keep my design book collection in two different places: My home and my office.

I remembered Wes mentioning to me that there was software that allows Mac users to use their iSight camera as a barcode scanner and quickly gather information about the books you own through Amazon.com. I sought it out, downloaded it, tried it out, and ultimately bought it. It's called Delicious Library, and I would highly recommend it for anyone who has a library of expensive books (like design, or architecture books), CDs, Software, or anything else that has an ISBN code and would cost a ton to replace.

When you've cataloged your books you can publish that catalog to the web (using mobileMe) to help people not buy you duplicate books...if you're the type of nerd who likes to get books on gift giving occasions.

You can check mine out here: http://homepage.mac.com/jonsandruck/deliciouslibrary/

Last Friday I got a very cool e-mail. It was from Bill Gardner, the head of Gardner Design, and the co-author and editor of Logo Lounge. It was to inform me that two logos that I submitted to logoLounge.com had been selected for inclusion in Logo Lounge Vol.5. For those of you who don't know this sort of thing, Logo Lounge is a big annual international compendium of the best logo designs in the world.

It's juried by a bunch of well-respected international logo designers, and is the top-selling book in Rockport's lineup of design books...which puts it right up there with the top-selling of all design books. With any luck it'll mean an influx of work from people who prize good design in about 6 months.

At any rate it gives me the right to claim to be an award winning designer, and it gives me a little constructive reinforcement from a jury of people I respect. Yay me.

The folks over at Under Consideration clued me into a site with a forum full of bad/confounding/somewhat hilarious feedback offered to graphic and web designers.

This lead me to an even funnier site that randomly serves up the quotes from an earlier discussion of a similar nature. Go check it out:

I think that even if you aren't a graphic designer, but perhaps an architect (ahem) or in any other profession where people with limited working knowledge feel that they are profoundly smarter than the professional they've hired for the undertaking, you will find this entertaining.

And if not, maybe it'll give you just enough insight to not make an ass of yourself the next time you hire someone to do something you're ill equipped to do for yourself.

Dell came out with an interesting, and heavily speculated-upon, little piece of technology today; namely, their new Inspiron 9 "Mini" Notebook.

For those of you who read this site and don't know, it's what is called a "NetBook" which is basically a laptop so small that it's extremely light, portable, and a little skimpy on the storage and processor. It's intended mostly for use with The Internet and the various webApp sites out there; like Google Docs, Flickr, and mobileMe.

The overall concept of the NetBook is something I've always found appealing; a cheap, light, low-power machine for doing e-mail and web surfing and blogging. It's a laptop for most people that I know, who, frankly, don't do much on their computers at all. Until now, however, the netbook has either been a)built by companies you've never heard of, or b)sold as super-compacts by the mainstream manufacturers at an insane premium. (Can you say "MacBook Air?")

So, this is great. A mainstream manufacturer, with a good reputation, selling a super compact machine for about the same price as the oddballs. (About $400.)

Now, if only it could run OS X. (Legally)

So, I am sort of working on my photography lately. I've decided that it's interesting, and I want to work on it...so I am. Thankfully I have some clients who are willing to let me, and even pay me, to work on it.

To that end, I have been doing some reading on how to really work with light, beyond just getting a correctly exposed picture to come out the back.

One of the cool things that I have discovered is a cheap set of wireless flash triggers. (These things normally cost $300+)

Check them out here: http://www.gadgetinfinity.com/product.php?productid=16766&cat=0&page=1

And, just a reminder, my birthday is October 1st.

Changes in the office...

I can't speak for anyone else, but I really enjoy the new office. Especially since I got myself a new monitor that I am totally in love with. Check it out! 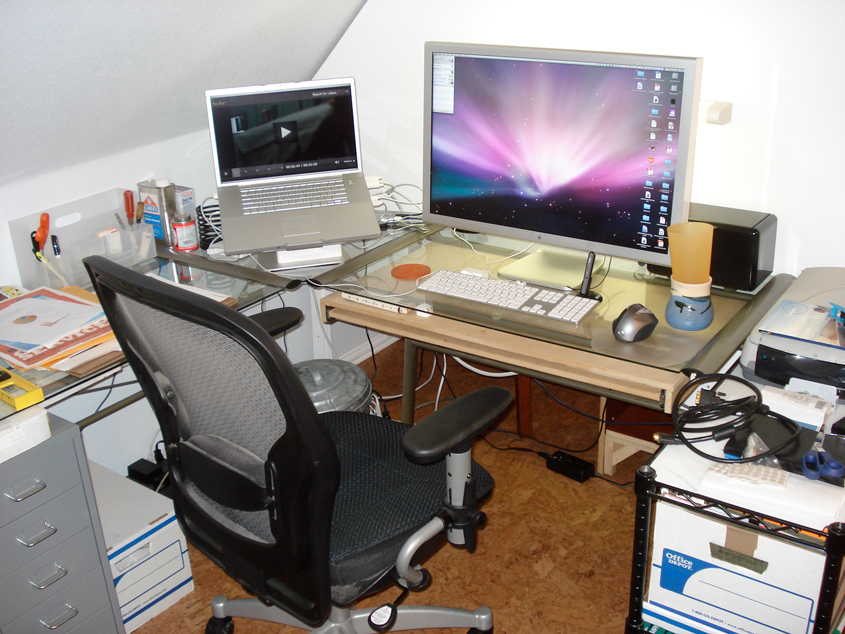 Yes, it's a 30" monitor.
Yes, it's nearly the width of my desk.
Yes, it's beautiful, bright, and color-accurate.

No, it is not a toy; and No, it isn't great for watching movies on (it has 3.5 times the resolution of a standard DVD, so it requires a fair amount of interpolation); and No, I didn't buy it for FUN.

Frankly, I'm tired of the inferences that pieces of equipment that I buy for my business are toys. I can't help it if you picked a lame career.