There's a lot in the news lately about a new Mac virus. Firstly, it's not a virus. It's a trojan. It can't spread on a network or via disk. You have to download it.

Second, it's not new. It's the same one that was rolling around 6 months ago, which was the same one as a year before that. It exploits a security hole that was plugged long ago. Do your updates, kids.

It also requires that you input your admin password in order to install it. So, it's not nearly as dangerous as the bazillion viruses out there for Windows, but it is really dangerous if you're the type to pirate software.

Here's what's up:
 First you download pirated iWork '09 or Adobe CS4 installers from a torrent site.
 Second, you run said installers.
 Third, you input your admin username and password, as you would expect to do while installing software. Especially CS4.
 Fourth, your Mac gets taken over by hackers.

The most annoying part of all of this is that Windows people will be all "Your Mac isn't so hot now, is it?" when really, the people who will get this Trojan would have gotten it on a Mac or PC, or any other computer system they use. The biggest threat to computer security remains between the keyboard and chair, regardless of OS.

Also - It really makes me sad to know that there are Mac users out there torrenting copies of really great, and really cheap, Apple products like iWork instead of just ponying up the $80, and compromising the reputation of the platform in the process. Especially when there is pretty nice, free, well-supported AntiVirus software for the mac out there.

I just lined up a babysitter for the summer. She'll be able to come to work with us so Oliver can be far enough away while we work but close enough if we want to kiss and hug him. It will also give us an idea of how much day care we'll need when our baby sitter goes back to school.

We're trying our paint samples for his room. No decisions made yet. The closet system is purchased, the room is cleaned out. It's a huge relief to get this far.

He goes in spurts of activity for days and then sleeps a lot for days. He's been quiet lately so I think he's resting and growing. Overall I still feel great. Nothing that tums, a massage or a nap can't take care of.

I hope everyone is doing well!

Look at her! She's got a belly full of baby! 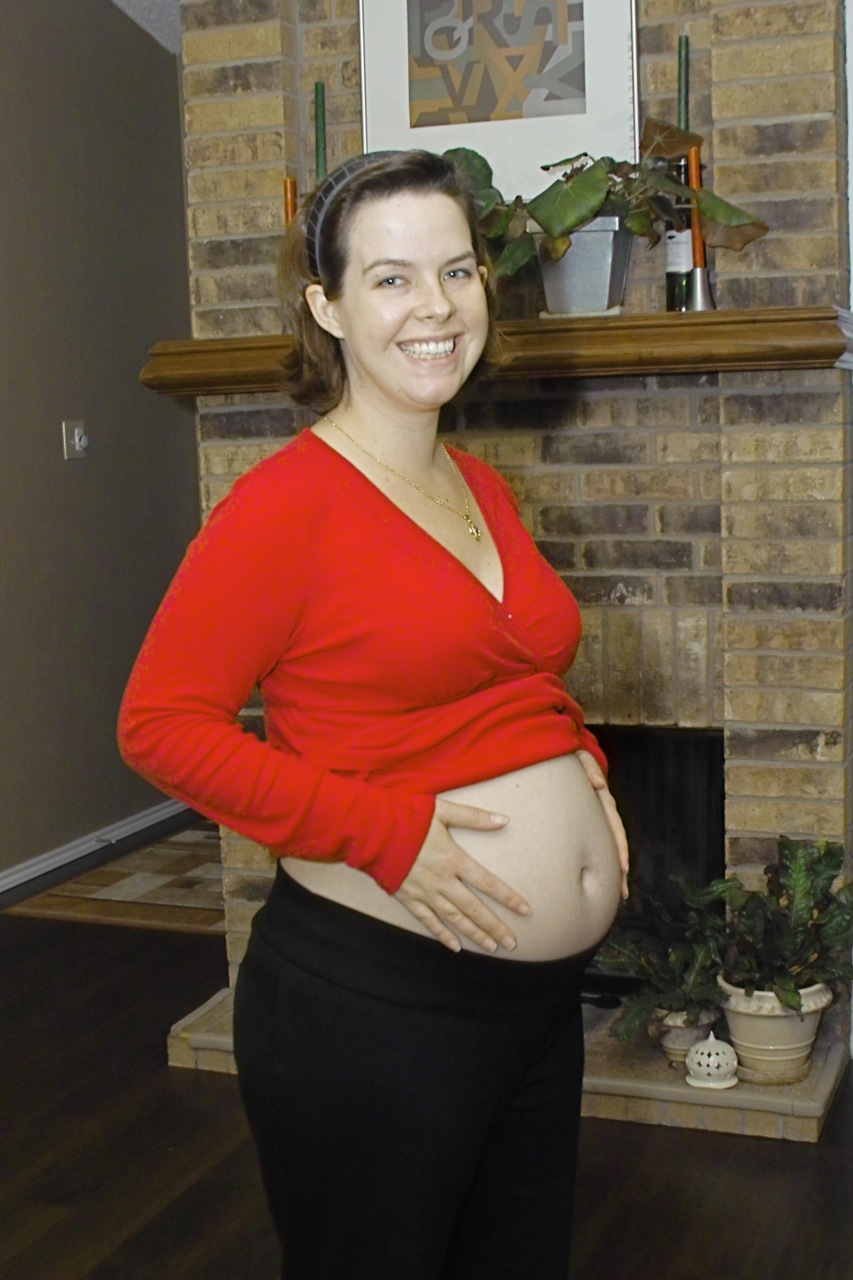 We went to the doctors today. He checked the size of my belly and listened to Oliver's heart beat. It sounded larger and stronger than before which of course is to be expected but emotionally for us felt fantastic. We go back for a check up in a month and then appointments are every two weeks! So in 6 weeks we get another ultrasound! I'm feeling good and starting to get large enough where I underestimate the size of my waist and bump into people/tables. And it's just the beginning of some serious growth. Oh the doctor said Oliver should be about 1.5 pounds now but didn't guesstimate his height. What I'm reading averages around 12 inches.

So 2 weeks and counting until our puppy comes home. Still no name but apparently she is quit a spit-fire. I'm so excited!

I had written this really long entry about this pork I braised, but then I decided it was lame.

So, here goes the short version:
I braised a pork loin today. It was pretty rad. You should all braise things. It's tasty. It takes all day, and requires a lot of patience not to mess it up by poking it all the time, but other than that it's really easy, and super tasty.

Seriously though, it's always fun to try out a technique you're not super confident in and pull it off. Today I learned how to braise. It was tasty.

So I was really happy to see Jon write a blog because no one has, when it occurred to me that I haven't either, I'm such a hypocrite. Oh well, it's nice to know that we're all okay dokay!

Wii-mote to the TV

We all wonder, every time we see all the warnings on our Wii, "What idiot needs to be warned not to chuck the WiiMote through the TV?" Well, apparently, this guy:

Wow. I mean, just, wow. I would like to point out two things this guy did badly:
1. Call for Mama. I mean, jeez. Unless she works for Toshiba, there's nothing she can do for you, buddy.
2. Smacking the broken TV...as though smacking the top is going do anything more than dislodge glass from the screen and deposit in the carpet.