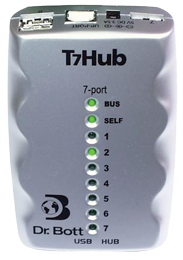 So, none of you probably care, but I have had bad luck with USB hubs. I was late to the USB party because I bought the last 2 Macs that came with ADB, SCSI, and Parallel ports (I loved my G3s) and then kept them limping along for far too long. So, because of that I have never really understood how the spec works, or the different types of USB devices. So, when I finally got a machine that had USB 2.0, I had to go out and get a hub, and I did so based on the recommendations of people online.

Here's the problem with that: There is a HUGE chunk of online buyers who review things positively to stave off buyer's remorse. I am convinced of it.

There's also a HUGE chunk of online buyers who review negatively a) without ever owning the product, which should be illegal, with heavy penalties and perhaps jail time, or b) when it fails to meet completely unrealistic expectations. (For example, expecting that Apple would support third party applications that require that you circumvent the EULA for the iPhone, is RETARDED.)

But, I digress. The point of this post is not to lambast idiotic "netizens," but to inform you all that after a considerable amount of research and heartache, I have found THE BEST USB HUB. EVER!

It's the Dr. Bott T7, BTW. A full review is after the jump... So, about a week ago I had a problem with a bus-powered external hard disk drive, which I had connected to a self-powered USB hub and which, due to power issues, failed and corrupted the disk, requiring that I buy DiskWarrior to recover my freakin' backups. So, I set out to find the best USB hub ever...which I started by learning about the USB spec and how it provides power to bus-powered devices. During that research I found a company called Dr. Bott, which makes and sells many devices that are specifically made for Macs, which wins them extra points in my book, and specifically makes a hub called the T7 that purports to be able to give high-power devices (like HDDs) the same amount of power as plugging directly into the computer. (Which was the problem with my last hub.)

So, I ordered one. They aren't much more expensive than the other well-reviewed 7 port hubs I've seen, and actually costs less than the one I am replacing.

It arrived yesterday. I set it up this morning when I got to the office. I am SO happy. It powers my devices beautifully. It will even power up the HDD while it's not connected to the computer...which surprised me. I have my iPhone connected to it too. This is what used to freak out my old hub. I would plug in the HDD and it would be fine. It would spin up and mount. The iphone would be charging, and I would have my Huey and my keyboard and USB headphones plugged in as well. They all draw a little power. Then, as soon as the HDD would start doing a backup it would fail and the whole hub would lose power. So, my HDD would disconnect, totally screwing up the backup, the iPhone would disconnect (or the iPod I had before it), the sound would spill from the headphones to the speakers, making all my officemates listen to the Don & Mike Show, and making whatever I was tying stop...if I was sitting there. If I wasn't, it would continually retry mounting the HDD until the disk was totally screwed and I had to rebuild it using DiskWarrior.

Anyway. The T7 is working wonderfully. I've done a Time Machine backup with everything in the world plugged in and humming along, and I've had no issues so far. I've even relocated the hub under my nice little laptop stand so it appears that I have a one-wire setup for all my crap. The only problem I have now is that I have too much stuff to plug in, so the old hub might be pressed into service for self-powered devices like my scanner and printer, and things I have to plug and unplug frequently, like camera cables...which are self-powered devices anyway, so it makes no real difference.