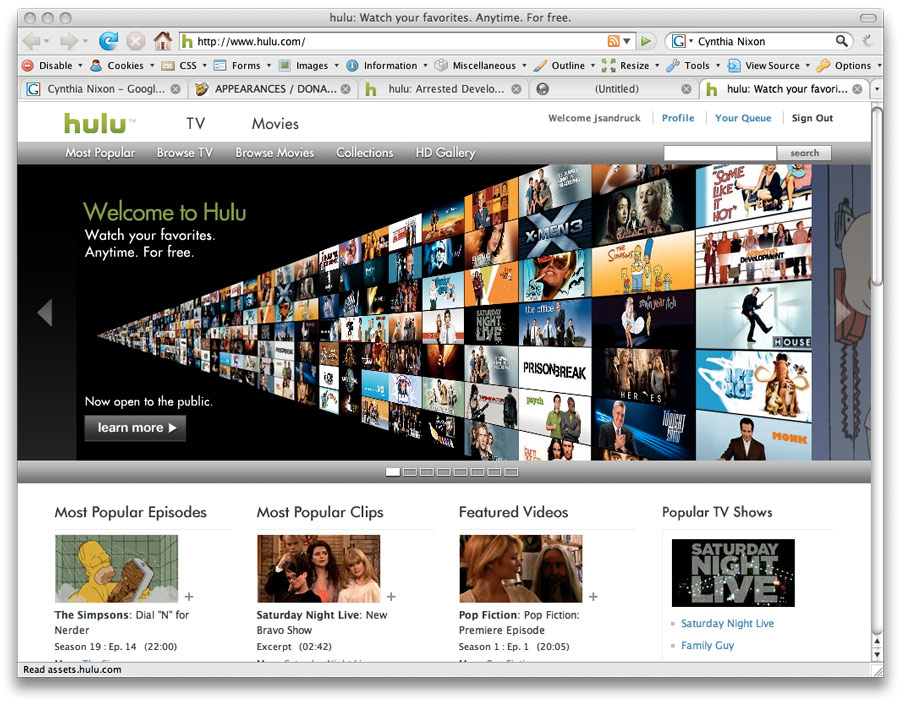 Some of you may have actually read the blog lately and seen that I have been using a site called Hulu to watch free and legal TV programs on the web. The only caveat of the system is that you had to get accepted into the private beta in order to use it...well, and the ads. I actually don't mind the ads too much. They're short. One ad per break, instead of four or so on TV. It takes about the same amount of time to FFWD through the ads on TiVo as it does to watch the one ad. No biggie.

The site is out of Beta, which means you can join now for free, without waiting to get into the program, and start using the site to watch TV. Why would one do this? Easy. The writer's strike wiped out TV and we've still got anything from a few weeks to a few months (or in some cases, like 24, almost a year) before new episodes will begin airing.

The other great purpose of the site, as far as I am concerned, is that I have been able to catch up on shows that I didn't watch the first time around, such as Arrested Development, Andy Barker PI, the last few seasons of the Simpsons, etc.

I'm also one of those people who can't not have a distraction going while I am working. I need to have something to ignore in order to concentrate. I'm broken that way. So, for me, Hulu is an endless stream of contend that I can have on in the background without exhausting my waning supply of Don & Mike Show Podcasts. In fact, most times I minimize the window with the video in it and just have the noise on.

Regardless of your reason to use it, the site works pretty well. It used Flash Video to stream the content, so go get your Flash Plug-in updated. I used it both at home on my 1.5 Mb DSL connection and at work with my 5Mb ViOS connection, and it seems to adapt itself pretty well to both conditions. They have a pretty impressive catalog of content, including TV and Movies, and some Internet-Only programming, including what essentially amounts to DVD-Extras...but not on DVD.

So, go watch some TV on the Internet at Hulu.com.