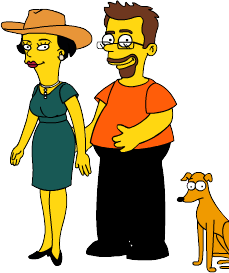 So, in case you are hiding under a rock these days and haven't realized that there is a Simpsons Movie out there and to promote it The 20th Century Fox company has been making "Simpsonized" drawings of media people to get them to give them free press, they uh...are doing that. Man, I structured that sentence poorly.

ANYWAY. You can I, and my wife and your lover, mother or brother (or any combination thereof) can go to SimpsonizeMe.com and do the same thing. They have you upload a photo if yourself, but truthfully, it's based on a short survey you take, and then you customize it.

Jocelyn and I did ours late last night, so feast your eyes on Jon and Jocelyn and Mabel Simpson. I encourage you all to go do your own and post them up.