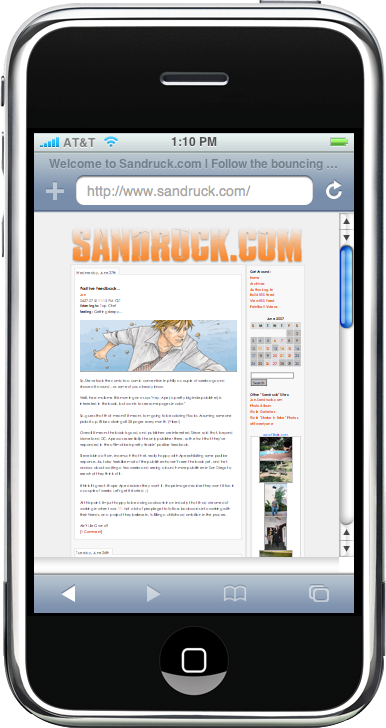 Unless you really hate Apple, you've been anticipating the iPhone. I know I have, even though I couldn't hold out to get a new phone until it came out. Sonofabitch.

It's going to be released tomorrow. Rate plans have been announced, and despite some really rather one-sided, cynical, anti-Apple negative iPhone crap out there (and I'm looking at YOU, Wired Blogs. Is it really going to cost you $6000 to own an iPhone? Perhaps. Will it cost just as much to own a top of the line Blackberry or Palm or Nokia or Samsung of Motorolla Smartphone? Hell Yes. More. The data plans for Treos are retarded! Go sell crazy somewhere else) just about everyone in the technology world is anticipating this release.

Why? Because it is going to be awesome.

I started this post off-topic, and I suppose it's time I reign it in. There is a pretty cool little open-source app out there (app is Mac/Unix Nerd-Slang for "Computer Program") that lets you see what your websites and web-Apps (that's web-based application/program) will look and act like on the iPhone.

Well, not really. But it looks like it...which I suppose is pretty cute, if not less useful than I had though initially. Anyway. I tested some recent sites I've built. They all work. Thankfully...