Okay, so I'm a day late, but I am here to tell you all about my Sunday at the paintball park.

This will be an extended entry, so in interest of not dominating the whole front of the site, I will making it short, and if you want to know more, read on after the "more" tag at the bottom.

Briefly:
Keith and I played really well together. In the early morning we played 2 on 3 against some kids and did okay. They won a lot, but there's not much you can do about it. One of them played commendably well. He was fast and fearless, and skinny. It's hard to shoot skinny kids. ;-)

The middle of the day was a loss. There were too many people in one group to play well, and a lot of them were spoiled rich brats shooting $1000 guns and throwing more paint than I shot all day. At one point I was holding off a 4 on 1, for well over a minute...which is proof that they couldn't play their way out of a paper bag. A fat guy shouldn't be able to hold off a 4 on 1 for more than 10 seconds unless you are all punks.

As the whiny rich kids trickled away we picked back up with reasonably sized groups, and Keith and I started to clean up again. The last game we played definately ended the day on a positive note, as we systematically dissassembled the opposing 4 man team in a scant few minutes of play.

All in all, a good day of paintball, and very encouraging. Keith and I are thinking about putting together a 3-Man team to compete in a 5-Event rookie series being hosted by a local field. That's how well we played.

Okay, now for the detailed accounts.

First of all, it's a very nice park. And it oughta be, for the $35 it cost us for Air and Greens Fee and the Bring Your Own Paint fee (which you have to pay, because they only sell two types of paint, for which they charge way too much). They had nice AirBall fields. They had one field for each of the major tournament series. (You see, each one uses slightly different proprietary inflatable bunkers, which, of course, bear the series logo.)

This, by way of an example, is an NXL XBall field: 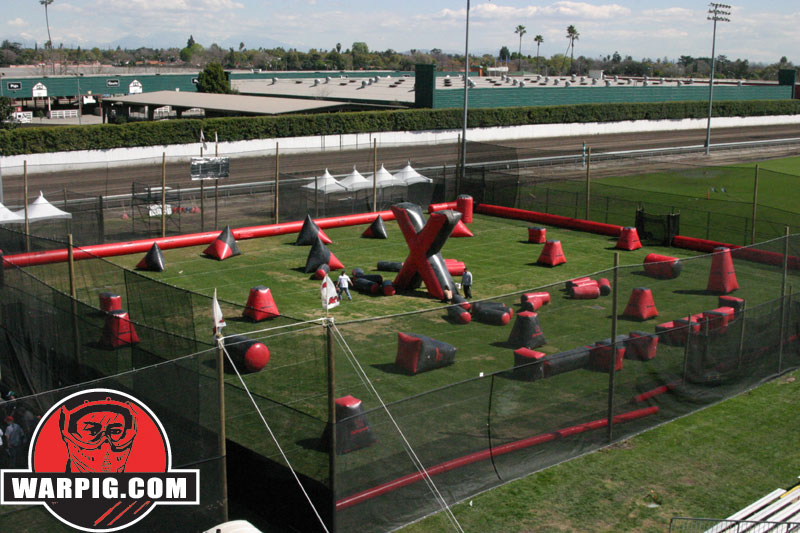 They also had some good woods fields, but nothing too awesome. There was a clear field advantage on both of the ones we played, which makes it not so much fun for me. Although Keith and I did manage to turn the tide and win from the disadvantageous side on both fields.

What it basically came down to is that Keith and I play very well together. Between us we have good field awareness, and the ability to help each other move up the field and eliminate people.

I'll break it down by field for you.

Okay, the first field we'll talk about is D Day. It's a big hill, more of a cliff really, with winding passages that go up the side built out of sand bags. The other side of the field (the left if you're on the top of the hill) is wooded and heavily bunkered. At the base of the hill there are a bunch of small triangular bunkers that offer very little cover.

We started off on the bottom. So, Keith and I opted to take the downhill side, knowing that the action would take place on the hill up top, but that if the other team was allowed to come down the hill they would wrap around behind our team and win. Keith stayed in for most of the game, finally being hit right after the ref called the one minute warning. I stayed in, preventing the other team from coming down the hill, and suprisingly, eliminating someone when one of my Marty Bush-Style "shoot at the noise" shots found its way onto someone's goggles. With 30 seconds left in the game, my team (finally) made the push and took the game.

The second D Day game we had the top...and decided that we would not make the mistake they did, and put enough guys on the down side to take it, and wrap. They (foolishly) sent only one teammate to the down side, whom I eliminated in the first 10 seconds of the game. Leon (the guy who came with me to the boring side) and I worked our way down the hill, shooting the other team in the side as we went, until we eventually eliminated the entire other team. Rock.

The third game they split Keith and I up, and gave me some 'tardo that was wearing a camelback and had different guns for woods and speedball, and frankly, didn't know what to do with either one of them. He couldn't be bothered to support his teammates, even when they had superior field position. DICK. Anyway, I have no idea who won that one. I think we did. Keith shot me as I was laying in this ditch trying to get Mr. Camelback to give me some suppression. DICK!

Like I said, the middle of the day was a waste. Keith and I were split up again, and I got stuck on a team with a half dozen 12 year olds and their Mom, somebody's Dad (I know because they called him Dad), and some guy that kept calling shots, but not going where he said. Keith's team cleaned up. I did shoot Keith out once though. We both went to the same tape, and when he slid into his bunker I started sweet spotting the inside of his bunker, so when he tried to shoot across the field, I hit him in the gun.

Toward the end of the day I went to get air, and when I came back most of the rich kids had left, so I hopped in with Keith and a few other kids for a little three on three. We managed to draw a teammate that took a call well, stuck the plan, and communicated well. That game was short. Two kids walked off, and right as we were getting ready to call it a day, because who wants to play 2 on 2, these 4 guys walk on and are like "Hey. Got room for some experienced walk-ons?"

Well shit. Experienced walk-ons? Was that an attempt at intimidation, or a warning, or what? So we said sure, no problem. Do you four want to play together?

So, off the break, Keith and I are chattering back and forth and throwing a little paint. I managed to sweet-spot the guy going into the right corner bunker, and keep two other guys from getting to the snake (that's a series of long bunkers that go up the side of the field). So we're up one from the start. I am the man. Keith and I start working the two other guys they sent to our side. Mistake, by the way, sending three guys to the right in a 4 on 4 game.

Keith is keeping them pinned down, or distracted, whichever, and gives me the opportunity to wrap around my bunker and shoot at the lone gunmen in the left corner bunker. I hit him in the pack. He turns to shoot at me anyway (cheater), and I let loose another volley of paint. He calls himself out. I later found out that I shot the pneumatic hoses off his autococker. Badass. Good luck "playing on" minus a ram. (Playing On is when you get hit, but decide you want to keep playing anyway. Usually people do it when they decide that hopper hits, or pod hits, or whatever don't count, or when they think they hit you first in a heads-up situation.) I then turn my attention to the two guys on the middle of the field. One guy moves into the snake, and I somehow miss him when I send a stream of paint his way while he's on the move. Damn.

Keith keeps the guy on our left (on the right side of the field) looking at him for long enough for me to post up and shoot him in the back, then I move into the other side of the snake and post up on the last guy. Keith sends a couple of balls at him, and when he backs up out of Keith's line of sight, he backs directly into my stream of paint. And that was the game.

That last game took about a minute. It was total domination. We took them apart. I felt so invigorated.

Our oppontents had a gun to repair, so we called it a day on that positive note and packed it in. And, that, was our day of Paintball.