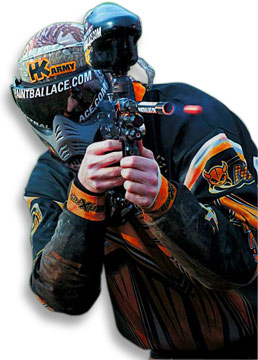 As you all know, Jeff and his girlfriend Kathe visited this week, and it's had a curious side effect...beyond the eating too much and the gaining 6 lbs because Jeff wanted to go on a BBQ tour of DFW and it being thanksgiving and all.

As some of you know, I am in the middle of a long weightloss thing here, and I said a while ago that I would start playing paintball again when I have lost the weight.

Well, because of Jeff's visit, I've decided to go back to the sport a little early, but as a rec player, and I am using my illustrious return to competetive play as a training goal.

I am excited about this. I used to play a lot. I had a lot of fun. I ran a lot. I weighed 215 the summer that I played on the circuit. I want to get there again...and one of my problems is that I hate working out to "be healthy." I need to train for something. I need to improve in order to do something, and I need to compete. It's a lame-ass part of my personality, but it's there whether I like it or not.

So, I am going back to paintball. Please support me. It's the only team sport I've ever really liked. It's just too bad that I sold my kit to pay for the 50 Foot Ninja recording. You'll notice that there are a lot of new P-Ball related items on my amazon wishlist.