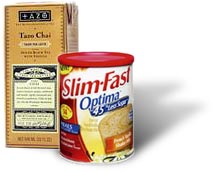 So, as some of you may know, I've been doing the slim-fast thing in the morning because, well, I really should eat breakfast, but I hate to eat breakfast. I heard this story on the radio about how Sumo wrestlers skip breakfast when they want to gain weight. Anyway. I've been experimenting with the SlimFast to see what makes it more tasty.

Not that it isn't tasty all on its own, but I got a little bored with the vanilla.
The first experiment was pouring brewed coffee into pre-made SlimFast. That worked okay, but it was kind of lame because the coffee had to be cold, and it had already been sweetened, so it was too sweet in the end.

2nd experiment was instant coffee. I initially used way too much. A tablespoon. Turns out, a teaspoon was sufficient. Overall effect? Very nice. I used Folger's Crystals, because I wanted the caffiene. Maybe next time I will try Sanka.

3rd experiment: Tazo Chai Latte. This is the BOMB ASS SHIZZY, y'all. Seriously. It made me say Shizzy. I mixed the slimFast as normal, then topped off my blender with 4 ounces (that's half a serving) of Tazo Chai Latte. Boy howdy. That's some tasty stuff.

Your turn for the spelling lesson.....experiment...

Nicole and I like the cappuchino delite slimfast....but they are really strong...you smell like coffee for days, and you have to like cold cafe latte.
During the summer we would split one can and add about a cup of skim milk to each glass. This cut the calories, the caffeine, the odor and, of course, the cost. Overall, a great drink on the drive to work.

Ahem. Cappuccino doesn't have an H in it, spelling bee queen.

Or is it Queen Spelling Bee?

1. I'm glad I'm exempt from the spelling corrections. I know I make them and I thank all of you for letting it be.
2. It's about time someone called Jonny out on a typo. Whey to go Bernie. ( Look there, I made a mistake and I'm keeping it.)