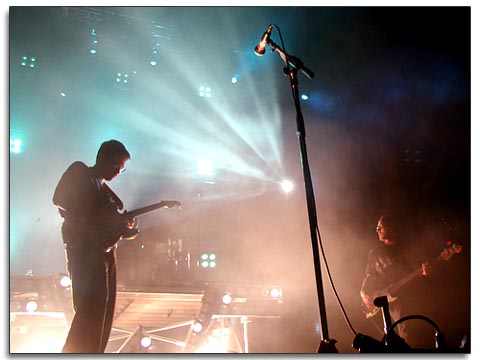 Went to see Weezer last night (Thanks Keith). It was cool. They put on a good show. Rivers was a lot more animated than when we saw them in Philly. He was doing a lot of the 'Jim Morrison' stuff. You know, thrashing around on stage, falling down, banging on stuff, etc. They had an extra guitar player on stage for a big chunk of the show because Rivers wasn't playing, or he was playing piano, or he was otherwise running around.

Overall it was a good show. We got there a little late...but we got into the shell as they were starting SurfWax America, one of my all-time favorite Weezer joints. It sounds so optimistic and poppy, but it's all apocalyptic. It's great. I love the dichotomy.

The stuff on the new album is way better live. The album is completely inorganic. Live, they were Rock songs.

Let's see...What else...We skipped out on Foo Fighters. Way different show than when I saw them in '96. It was all screamy and loud and it hurt us, even Keith, who is partially deaf.

Okay, now I am going to go scream curses at everyone, because I tried not to use any in my post. There you go, Mom.

Wait till I tell Kevin he's going to be so jealous.

Alas  I did not take that photo. I stole it from the Weezer website, color corrected it (making it more awesome) and posted it.

I couldn't have gotten my HUGE huling brute of a camera (which I love) into the venue if I had tried.

I need to snag some press credentials or something so that I can do that in the future. That'd rule.